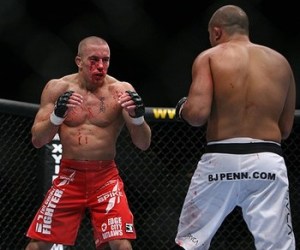 Returning to UFC after leaving the promotion due to what he claimed was a lack of competition, BJ Penn stood across the cage from a man who would give him more than he could handle — Georges St. Pierre. Meeting in March of 2006 for the right to meet then champion Matt Hughes’ Welterweight Championship, “The Prodigy” and St. Pierre were both eager for the opportunity and this meeting proved it. Back and forth for three tense rounds, the bout could have been a showcase for the gifted Penn. Instead, it was St. Pierre who won out, winning a close split decision and announcing himself to the world as a fighter to watch he would later become the greatest fighter to hold welterweight belt.

One of UFC’s first great rivalries, the war between “The Iceman” and “The Huntington Beach Bad Boy” started long before this 2004 showdown. Friends and training partners early on, Chuck Liddell and Tito Ortiz broke into the fight game together, but when it came time for Tito to put his UFC Light Heavyweight Championship on the line against his pal, he refused, claiming that the two had made a pact never to fight. Liddell said he had no idea what Tito was talking about, but the two men would not meet in the cage until after Ortiz had lost his title to Randy Couture. When they finally did throw down, it became apparent why Tito ducked Chuck as “The Iceman” obliterated the California-native with one of his devastating punches early in the second round. Living up to its ample hype, the brawl announced Liddell as a heavy-handed anti hero and Ortiz as a fighter fans would pay to hate they would meet again and to be fair there’s no love lost between them.

Built up like a WWE match thanks to the some CM Punk like microphone theatrics of the always controversial Chael Sonnen, the August 2010 bout between UFC Middleweight Champion Anderson Silva and his trash talking adversary could have easily fallen flat after months of hype. After all, Silva had been sluggish and distracted in many of his recent fights and Sonnen’s bark could have been much worse than his bite. Instead, the fight was an overnight classic. A five-round war, the bout was dominated by Sonnen for the first four and a half rounds as he continually scored with huge takedowns and punches. Yet, just when it seemed like the powerhouse was going to back up his big mouth, “The Spider” latched on a triangle armbar with 1.23 minute to go in the fifth. It was a dramatic ending that proved Sonnen was a worthy challenger and Silva was a true champion they would meet and again but it was a bit of a let down after the first epic fight.

The first fight of one of UFC’s greatest trilogies, Chuck Liddell and Randy Couture met for the interim UFC Light Heavyweight Championship in the town of Paradise, Nevada, in June of 2003. Slumping in the heavyweight division at the time, Couture cut down to 205 pounds for this clash, which many thought would put “The Natural” at a disadvantage. Instead, the wrestling specialist surprised many by out-punching “The Iceman” before ground-and-pounding his lights out. With the victory, Couture became the first man to knockout “The Iceman” and the first UFC fighter to win a title in two different weight classes. Liddell would get his revenge, though, smashing Couture in both of their following fights but these two men built the 205 weight class with there 3 fights .

Celebrated as two of the most exciting fighters on ufc roster, brawlers Diego Sanchez and Clay Guida did not disappoint the UFC faithful when they finally clashed in June of 2009. before they made it to the cage they had daggers for each other the walk to the cage and the staredown where just as intense as the Immediately physical, this violent bout saw both lightweights trading serious bombs in the opening minutes before Sanchez connected with a head kick that nearly removed Guida’s trademark curly locks. Down but not out, “The Carpenter” rallied and saw to it that the fight went the distance. In the end, Sanchez claimed the victory by split-decision, but both warriors shared “Fight of the Night” honors and effusive praise from Dana White and MMA fans worldwide the fans to this day would still like to see a rematch so who knows.

Hope you enjoyed my picks, what fights make your top 5?