THE ALL-AMERICAN WHO SQUASHED THE SPIDER AND COST UFC MILLIONS

Every king gets dethroned, it happens in every sport.

Whether its father time catching up with the king OR the king has achieved everything he can and lacks the motivation OR if the king faces a challenger unlike anyone he has ever faced before who just totally overwhelmed him.

Saturday night in the MGM Grand saw the king of MMA, pound for pound best, MMA’s version of Floyd Mayweather in boxing, the previously unbeaten in UFC and Middleweight Champion of the World Anderson ‘The Spider’ Silva defend his crown against unbeaten Chris ‘The All-American’ Weidman.

The odds were heavily stacked in the favour of the champion, who had won 16 straight fights in UFC and never experienced a loss in the famous Octagon, in fact he hadn’t lost a fight since January 20th 2006 to Yushin Okami for an illegal kick.

The champion also had an impressive resume in the UFC with big names on his winning record such as Rich Franklin, Nate Marquardt, Dan Henderson, Forrest Griffin, Demian Maia, Chael Sonnen, Vitor Belfort & Stephan Bonnar to name a few.

The only time Silva even came close to losing was his first fight against Chael Sonnen where he was battered for four and a half rounds until he managed to transition a triangle choke on Sonnen with seconds remaining.

So the future was sorted for Silva, and the much mooted ‘Super Fights’ against either George St Pierre (GSP) or Jon Jones have gathered pace for the past few years as all three kept winning and looked good in the process, the mouths watered and the $ signs got larger and larger, it was MMA’s version of what boxing fans wanted and now seemingly won’t get in Floyd Mayweather v Manny Pacquiao.

So GSP  won his fight in March against Nick Diaz, Jon Jones has Alexander Gustafsson in September 21st at UFC 165 so all Anderson Silva has to do is beat his American challenger Chris Weidman and we’re still on right?

Chris Weidman the previously unbeaten fighter, only fighting in his 6th UFC fight was the next in line to face The Spider.

Many thought this fight was way too early for Weidman and Silva would be too much for him and it would be business as usual Anderson will KO or submit Weidman when he wants. 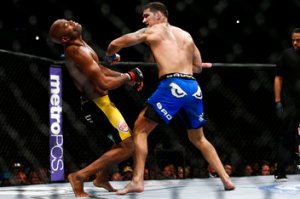 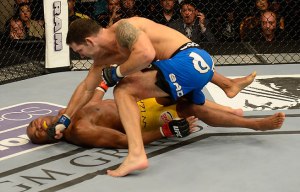 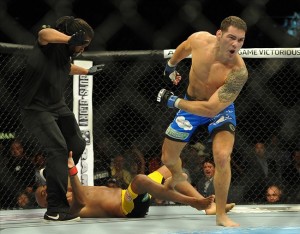 Some fans certainly tipped Weidman as did a lot of experts in the MMA world but even so deep down not many of them truly thought Anderson Silva would lose this fight but thats exactly what happened in round 2 when a series of punches from Weidman along with some strange movements from Silva, a little bit Muhammad Ali like with the leaning back technique which he has used for many years failed him when Weidman cracked him on the chin each time he swung a punch.

Weidman was obviously known for his tremendous wrestling skills as he was twice an All-American hence the nickname, he was also the first junior college wrestler in history to be a NYS Collegiate champion.

While at Hofstra University, Weidman met Gabriel ‘Monsta’ Toribio, Weidman was invited along to Matt & Nick Serra’s BJJ Academy to help out with the wrestling to improve some of the fighters in the gyms skills in that area, while there he took part in some Jiu-Jitsu classes and within 3 months took part in the East Coast Grappler’s Quest in the Absolute Division and won the competition with 13 wins from 13, all of which were submission victories.

Weidman was introduced to Ray Longo’s MMA Academy by Gabriel Toribio and he was to make a very quick impact with his MMA qualities . He is now a wrestling instructor at Longo’s Academy.

Weidman made his MMA debut at Ring of Combat in February 2009, winning his first fight via komora submission in round 1. Weidman would compete 3 more times for the organisation winning all three matches, two via TKO and the other via unanimous decision.

His very impressive resume was noticed by the UFC and the call came to get Weidman into the big time and his debut was on March 3rd 2011 on the undercard of Sanchez v Kampmann where he faced Alessio Sakara. Weidman won via decision and was off to a flyer in UFC.

Next up was Jesse Bongfeldt at UFC 131 where Weidman was again impressive, this time winning via a standing guillotine choke and the submission of the night prize in the process for a very impressive and unique submission move.

UFC 139 was the next time we would see Weidman, his opponent would be Tom Lawlor who had just beaten Patrick Cote in his previous fight. Weidman would again show off his impressive wrestling and submission skills winning the fight with a d’arce choke in the very first round.

It was time for a step up and throw some big names at Weidman and at UFC on Fox : Evans v Davis he got his toughest fight to date in Demian Maia. More impressively about this fight was Weidman took this fight at only 11 days notice due to injuries and pull outs in the main events. Weidmann would via unanimous decision and had a big name on his card but his next name would be bigger than that.

It was July 11th 2012 and 4 days prior to this fight Anderson Silva had just destroyed Chael Sonnen in the second fight between the pair after Sonnen had dominated but lost the fight in round 5. The winner of Weidman v Mark Munoz would propel themselves into contention for a shot at The Spider so this was a huge fight for both. Weidman looked amazing, dominating the Filipino Wrecking Machine and finishing him in round 2 with some brutal elbows and punches.

After the win over Munoz, Weidman said he wanted a shot at Silva but admitted he may not deserve a shot as he doesn’t have enough ‘top names’ on his record yet.

He was going to get the chance to add a top name at UFC 155 in December 29th 2012 with Tim Boetsch but had to pull out of that fight due to injury. 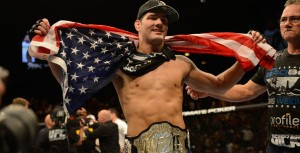 Despite this, and the lack of big names on his record, and the fact he only had 9 MMA fights, Weidman was given the shot at Anderson Silva at UFC 162 and as we discussed before knocked out the champion in round 2 to become the new UFC Middleweight Champion.

There is no doubt MMA is the fastest growing sport in the world, UFC is the biggest organisation by an absolute mile and has the toughest fighters on the planet. But the ramifications of its biggest star Anderson Silva losing will depend how UFC reacts to this in the next few events.

Every superstar eventually loses, Muhammad Ali who Anderson Silva is a massive fan of and has mimicked some of his styles on the Octagon lost several times in boxing, only Floyd Mayweather is unbeaten in regards to superstars at the elite level. In MMA you don’t stay unbeaten you will lose a few fights, of course our new champion Chris Weidman has that perfect record now but being champion and taking out the big dog in Silva the target is now on his back.

Even though Silva said Weidman is the champion I won’t go for the belt again I’m not so sure thats the case, Silva lost his first fight in 7 years, he won 17 fights in a row so he’ll be hurting big time and will want a rematch when the smoke clears.

This rematch could have massive ramifications for what happens with the Super Fights and potentially millions of dollars UFC will earn if they happen.

But who’s to say Chris Weidman can’t defend his belt against 3 or 4 top names then get a Super Fight?

Would GSP or Jones have knocked out Silva in round 2?

Its hypothetical I know, but Silva may well have underestimated Weidman like a lot of people did and took the fight lightly.

So for now we congratulate Chris Weidman on a fantastic victory, we thank Anderson Silva for his amazing run of wins in UFC, now we want to see The Spider regain his focus get the rematch and the winner of that could be onto big fights in the future. 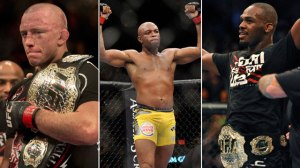 Lets hope we the UFC fans get to see Silva v GSP or Silva v Jones as boxing fans never got to see Mayweather v Pacquiao but the major difference is in UFC there is no politics, there is no tune up fights or journeyman its the most competitive combat sport in the world and thats why we love it!

Thanks for reading MMA fans